Here is a message from Selectra about Smart Meters:
More information about smart meters…
As I’m sure you’re aware, the Government is rolling out smart meters into all homes and businesses before 2020. However, research shows that a huge percentage of the population are still not aware of the options available.


The Parish Council are aware of an application for outline planning permission to build eight houses on land adjacent to St Kenelm’s Road opposite the shops and is considering its formal response to the planning authority, who is Bromsgrove District Council.

The Parish Council would like to hear community thoughts while our formal response is being drafted. However, for them to be formally considered by the relevant planning officers, residents must lodge their comments directly with Bromsgrove District Council by the 12th January through their planning website www.bromsgroveandredditch.gov.uk and searching for planning application ref : 17/01377/OUT.

The Parish Council urges all interested residents to do this.
Copy ’17/01377/OUT’ and go to this link, then paste it in the Search Box at the bottom of the page. To make a comment you will need to register on their site:
Comment on Planning Applications

Hunnington is a village and civil parish in the Bromsgrove District of Worcestershire, England, close to the border with West Midlands, and just south of Halesowen. According to the 2001 census the parish had a population of 552.

History
It was originally a township in the parish of Halesowen, a detached part of Shropshire, and was transferred to the jurisdiction of Worcestershire in 1844.
It became a parish in its own right in the 19th century, and became part of the Bromsgrove Rural District in 1894 under the Local Government Act 1894, and then of Bromsgrove District under the Local Government Act 1972 from 1974. (Source:Wikipedia) 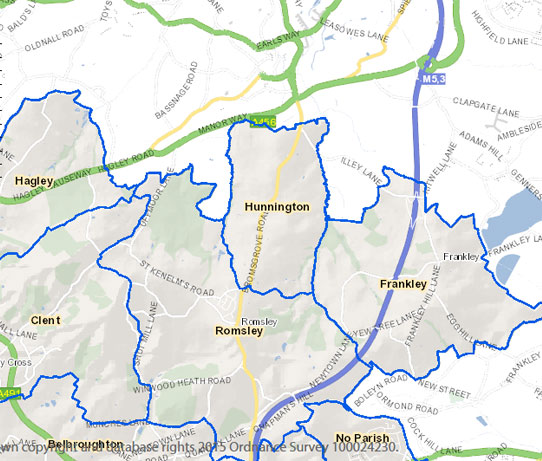 Click here for directions to Hunnington via Google Maps

The next meeting of the Parish Council will be held VIRTUALLY via Zoom on Tuesday 17th November 2020, 7.00pm
please refer the Agenda for more details

All parishioners and press welcome.
Please note the email address for Hunnington Parish Council is hunningtonparish@btinternet.com

Map of the Hunnington Parish Boundaries 2016

Below is the link to a downloads of the PDF file of the Hunnington Parish Boundaries from Bromsgrove District Council, published 2016.
This is a 4 detailed high-resolution image, which may take a while to download depending on your connection speed.
Hunnington Civil Parish Boundaries Map (4Mb)

This website uses cookies to improve your experience while you navigate through the website. Out of these, the cookies that are categorized as necessary are stored on your browser as they are essential for the working of basic functionalities of the website. We also use third-party cookies that help us analyze and understand how you use this website. These cookies will be stored in your browser only with your consent. You also have the option to opt-out of these cookies. But opting out of some of these cookies may affect your browsing experience.
Necessary Always Enabled

Any cookies that may not be particularly necessary for the website to function and is used specifically to collect user personal data via analytics, ads, other embedded contents are termed as non-necessary cookies. It is mandatory to procure user consent prior to running these cookies on your website.